Have an event you’d like to share for FREE with our thousands of readers? SUBMIT YOUR EVENT HERE 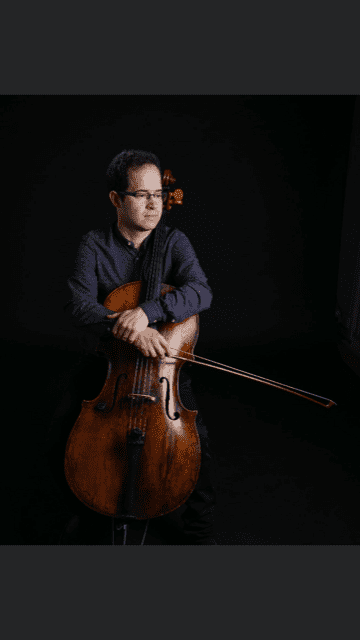 Dorset County Orchestra are delighted to announce their Spring concert, this year taking place in Grandsen Hall, Sherborne (Girl’s School) on Saturday 26 March 2022.
Their programme is a delight for lovers of classical music everywhere from Mozart – the Overture to the Marriage of Figaro, followed by Dvorak – Cello Concerto, played by the gifted soloist Arturo Serna (who just happens to also be our resident conductor) and finishing with the flourish of Schumann – Symphony no. 3 (The Rhenish).

Dorset County Orchestra has long been active on the local orchestral scene, and usually perform three concerts, in varying venues across the county, but like many musical organisations during the past two years, they have had to cancel or scale down their performances.
They are delighted to be bringing this programme to Sherborne, home to both our resident and guest conductors, John Jenkins.

Venezuelan born British conductor Arturo Serna has a dynamic career as a conductor/cellist and teacher. His musical journey began as a second generation graduate of El Sistema in Venezuela and was influenced by his mother, a violinist with the Simon Bolivar Symphony Orchestra. After leaving Venezuela, he studied in France, Switzerland and England and holds a Masters in conducting.
Arturo currently conducts the Dorset County Orchestra, Exeter Symphony Orchestra, Axe Vale Orchestra and Shaftesbury Symphony Orchestra. He has guest conducted for numerous events locally, including Hazelmere Music Society, Sherbourne Community Orchestra, Yeovil Community Orchestra, Bruton Choral Society and Wincanton Youth Theatre. Arturo teaches at Sherborne Girls, King’s Bruton, Hazel Grove and Lewiston schools. Many of his former pupils are now studying at world class conservatoires and university or play active roles in the music profession.

Leader Bärbel Glaser graduated with a diploma in orchestral music and a degree in music education from the Felix Mendelssohn Bartholdy Academy, in Leipzig, in former East Germany.
Now with more than 20 years experience as a freelance musician in Dorset and Hampshire, she leads the Dorset County Orchestra, Dorset Chamber Orchestra and Wimborne Chamber Orchestra and many local choral societies. She is also the leader of Magna Sinfonia and the Parry String Quartet and enjoys solo recitals, as well as teaching at local schools and privately.

John Jenkins joins the orchestra to conduct the Cello Concerto. He has led a varied musical career, from chorister at Bristol Cathedral, organ scholar of Durham University where he conducted the University College Orchestra and Chamber Choir. Roles as assistant organist at Bristol Cathedral followed, and included recording, television and radio broadcasts. He has conducted the Derwent Singers, enjoys regular engagements as organist and continuo player, whilst his choral work with young people has embraced music courses across the country. John was appointed organist of Sherborne School for Girls in 1992, becoming Director of Music in 1996, and co-conductor of the Sherborne Schools’ Symphony Orchestra and Choral Society.

The orchestra looks forward to welcoming you to this fantastic concert – tickets are available
from Winstones Book Shop, Sherborne (cash only), online from TicketSource here https://www.ticketsource.co.uk/dorset-county-orchestra , and on the door!

Is this a business or for-profit event?
No

Don’t forget to sign up to receive the monthly BV magazine here .